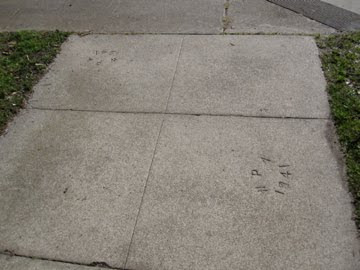 I want to thank Donald for waking me out of my blog fog. He pointed me to this photo on Caliber. Interesting theory about why names are stamped on San Francisco streets.

Back in January I walked the length of 36th Ave. and found a bunch of concrete markings.

A couple weeks later I decided to check out 37th Ave., just curious if the other side of Sunset Boulevard was poured by the same people. The coolest thing I found was a Works Progress Association stamp from 1941. First I've seen of these. I almost walked right over the first one because it was filled with dirt. I spent quite a while using a stick to clean it out enough to decode it, only to find several nice clean ones further down the street. 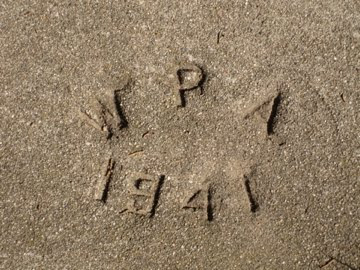 These are between Lawton and Ortega. I didn't find any other new marks on 37th Ave.
Posted by Janice at 2:31 PM 2 comments: