I headed down to Lincoln Way to see if the road work was resulting in any new mis-spellings. Instead I found that some of my favorites have been or are in danger of becoming eradicated. As they put in new pavement and ramps, they are correctly labeling the avenues, but not even putting in "Lincoln". 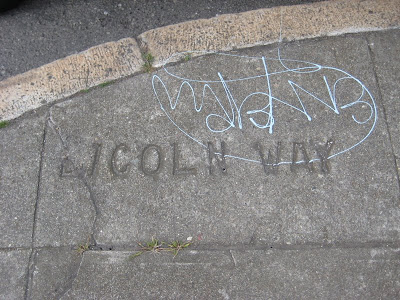 As I headed down Lincoln I passed one of my favorite buildings. 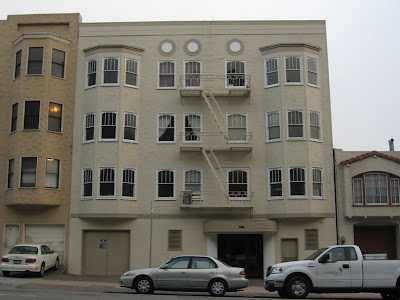 What's up with the circles? 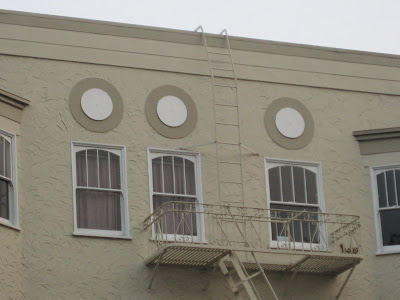 The entry is neat, too. 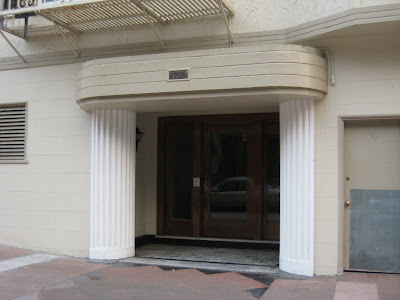 From the park I noticed that the building next door has almost the same layout. Look at windows. The one on the left has more garages. A check with city records confirms they were both built in 1928 and have the same number of rooms and baths. From street level I never noticed that because the entries, although both with columns have very different feels. 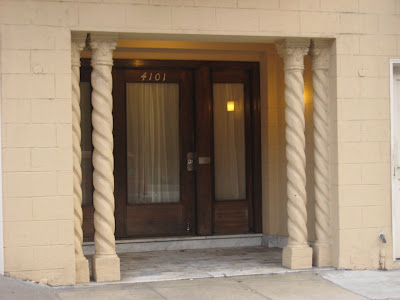 My friend and I were walking past those two buildings a few weeks ago and got into a discussion of their merits. I prefer the one on the right or west side. It still has more of its deco bling and the windows are great. I think whoever put the aluminum/vinyl windows in the corner place should be shot along with the idiot in the building department that allowed them to do it.
Hardly any buildings in the Sunset were built with non-wood windows. Owners go in and lie and say that they are replacing the original non-wood with non-wood and the DBI says okay. On many houses it is the windows and trim that add the style and beauty. So many of them just look like crap. Its not that the windows or sashes have failed its that they want the lower maintenance. So many of them aren't maintained at all - peeling paint, dead lawn or concreted over. No pride of ownership. Would it kill someone in DBI to do their job and look it up and see that a house built in the Sunset (or anywhere for that matter) before 1950 had wood windows and that is what should be put in.

I agree with you, I prefer the Deco look building.

As for the windows:

1. I'm sure you really don't want someone shot, otherwise I wouldn't publish this comment. But I totally understand your frustration. Some of the 3rd floor additions that have been allowed blow me away.

2. I despise black aluminum windows! Despise. It is one of my big peeves. On the corner of 25th & Cabrillo is an apartment building with part original, part aluminum. Yuck. I imagine it is really expensive to replace wood. At least vinyl comes in colors these days.

3. I wish people would take care of their houses. Some of them make me so sad. I dream of how I would paint and landscape them.

4. I do understand the financial reasons for neglect and cheap fixes. It is so expensive to own a house here. It is a dream I'm not sure I will achieve. I imagine there are many people can barely make their mortgage payments, let alone pay for maintenance.

I know many of our parents were not rich and yet were able to afford to live here. Today it is not the case that regular working people can, unless they have inherited a home.