I noticed this on the corner near Andronico's yesterday: 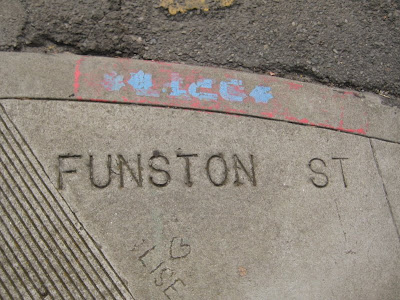 As we know, there is no 13th Avenue. It was changed from 13th to Funston in 1923, according to this article about a former Sunset resident, at the Western Neighborhoods project. There is a lot of other neat stuff in the interview, including Doelger homes. Hmm, this page has an excerpt from the 1919 "Call", which says describes someone as living on Funston Ave. I will try to do further research about that. In any case, the impression is wrong. Funston is not a street, but and avenue.

This subject reminded me of a book I have "San Francisco Street Secrets", which I haven't pulled out in a long time. Although it doesn't mention the name change, I learned that General Frederick Funston was The Army's Pacific Division Commander during the 1906 Earthquake and Fire. And Judah St. was named after Theodore D. Judah, the mastermind of the Central Pacific Railroad.
Posted by Janice at 9:52 PM

I always try to explain to people from out of town, that just like hotels, The City tries to pretend that the number thirteen does not exist.